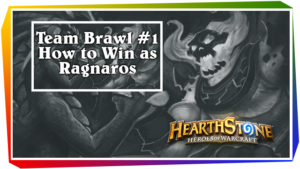 This is the first round for the new mode in Hearthstone called Tavern Brawl. I wanted to give some tips on how you can win a game with Ragnaros. Because at first its quite frustrating to play this heroe. Because your opponent can easily overwhelm you, because he starts with 5 mana and you start with 1.

Each Tavern Brawl presents a limited time opportunity to face other players in special matches with unique rules. These might be requiring players to use special premade decks, to build decks according to specific guidelines, or even offering buffs to certain minion types. Similar to Arena, Tavern Brawls allow the player to construct unique decks especially for the challenge from within the game mode itself. Each week will see a new Tavern Brawl, each with its own special rules.

Some Brawls feature Tavern Brawl cards, unique cards not available in other types of play, as well as boss cards from adventures such as Blackrock Mountain.

As well as being matched against other random opponents, players are able to challenge players on their friends list to a Tavern Brawl, similar to initiating a Duel.

An intentionally “fun” game mode, Tavern Brawls offer unique limited time experiences, with far less of a competitive focus than other game modes. This makes them good for quick matches, friendly challenges and accumulating gold through quests and cumulative wins.