Nothing is crazier in the modern world than the food we eat.

I was in the Omaha, Nebraska airport last month and I couldn’t find one store selling even remotely decent food. Greasy fast food everywhere. No wonder the government can’t fix health care.

For today’s Book-of-the-Day I was eating some chopped salad, pasture raised turkey and organic shrimp while reading “In Defense Of Food: An Eater’s Manifesto” by Michael Pollan. 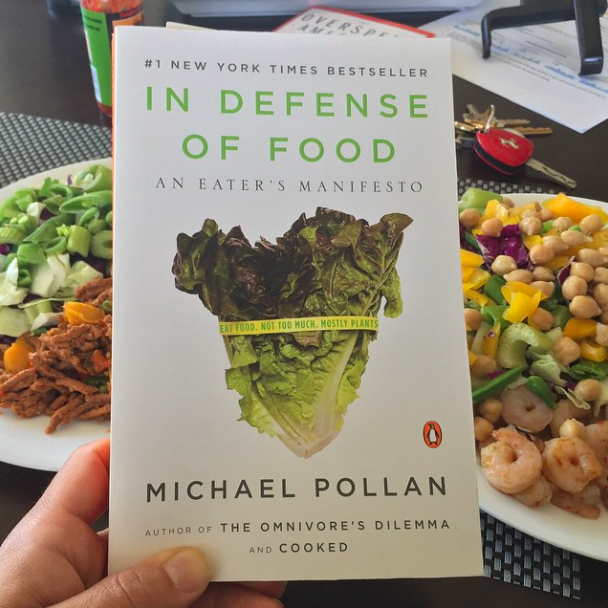 Here are a few quotes from my notes:

1. The big picture advice: “Eat food. Not too much. Mostly plants.”

2.  On supposedly healthy snack foods: “Organic Oreos are not a health food. When Coca-Cola begins selling organic Coke, as it surely will, the company will have struck a blow for the environment perhaps, but not for our health. Most consumers automatically assume that the word “organic” is synonymous with health, but it makes no difference to your insulin metabolism if the high-fructose corn syrup in your soda is organic.”

3.  On people saying healthy food is too expensive: “Is it just a coincidence that as the portion of our income spent on food has declined, spending on health care has soared? In 1960 Americans spent 17.5 percent of their income on food and 5.2 percent of national income on health care. Since then, those numbers have flipped: Spending on food has fallen to 9.9 percent, while spending on heath care has climbed to 16 percent of national income. I have to think that by spending a little more on healthier food we could reduce the amount we have to spend on heath care.”

I think most people have it all wrong.

It’s never too expensive to invest in your own health by spending less on stupid stuff and more on real food.

Stay on the rise,

© 2021 Tarantulo.lt.
@
We use cookies on our website to give you the most relevant experience by remembering your preferences and repeat visits. By clicking “Accept All”, you consent to the use of ALL the cookies. However, you may visit "Cookie Settings" to provide a controlled consent.
Cookie SettingsAccept All
Manage consent

This website uses cookies to improve your experience while you navigate through the website. Out of these, the cookies that are categorized as necessary are stored on your browser as they are essential for the working of basic functionalities of the website. We also use third-party cookies that help us analyze and understand how you use this website. These cookies will be stored in your browser only with your consent. You also have the option to opt-out of these cookies. But opting out of some of these cookies may affect your browsing experience.
Necessary Always Enabled
Necessary cookies are absolutely essential for the website to function properly. This category only includes cookies that ensures basic functionalities and security features of the website. These cookies do not store any personal information.
Non-necessary
Any cookies that may not be particularly necessary for the website to function and is used specifically to collect user personal data via analytics, ads, other embedded contents are termed as non-necessary cookies. It is mandatory to procure user consent prior to running these cookies on your website.
SAVE & ACCEPT